Last week the Village of Scarsdale released a distribution chart on its website that showed percent change in total assessed value as stratified by neighborhood. In aggregate it appeared to show only modest differences in the valuation changes by neighborhood. However, that approach masked the substantial changes that have occurred with the J.F. Ryan revaluation at a more granular level. In multiple presentations to the Scarsdale Board of Trustees, others and I have pointed to the ill-conceived and unexplained decision to use a square root model for determining base home values from which multipliers are then applied as modifiers. Use of a square root model suggests that homes of 8,000 square feet should only be valued at twice the price of a 2,000 square foot home. This appears to be an industry assumption in mass appraisals and its economy of scale assumptions may be accurate when valuing commercial real estate or even many other residential markets. However, it is quite likely that Scarsdale is poorly suited to broad industry assumptions. Our housing stock spans over a century and there is an order of magnitude difference in the prices of our least expensive homes and those at the top of the scale. Furthermore, the tear-down phenomena that is easily observed here is not common in most U.S. communities or even many neighboring communities.

In an effort to better illustrate the effects on Ryan’s use of a square root model on total assessed value in Scarsdale, I decided to recreate the same chart furnished by the Village of Scarsdale but stratify it by home size instead of neighborhood. I took two additional steps not present in the Village of Scarsdale chart to eliminate data noise and improve clarity. First, I excluded homes that have changed in size from Tyler to Ryan. This eliminates valuation changes that would be expected with the application of any revaluation approach. Second, I highlighted the segment of homes that experienced no valuation change (0%). While the mass appraisal industry only attempts to be accurate to +/- 10% of home value, I think it is important for readers to see the exact position that differentiates valuation increases from decreases. 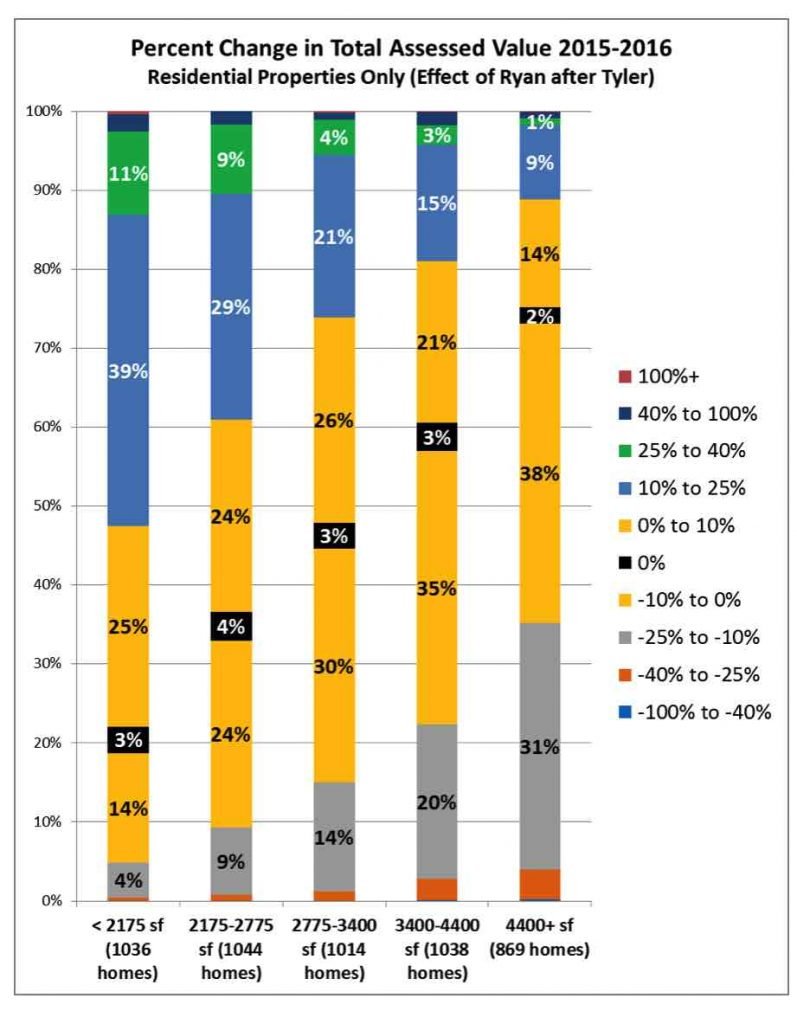 On April 21 of this year, John Ryan told the Board of Trustees that his goal was to create a uniform result. I say with great sarcasm, “mission accomplished.” The result of Ryan’s model is a uniform redistribution of tax burden based on the size of your home. We have a highly educated citizenry, and I suspect that no one here believes that this neatly staggered redistribution reflects the actual effects in nature of a more nuanced real estate market. As the chart above clearly shows, owners of homes less than 2,175 square feet have an almost 80% probability of being assessed upward and more than half of these home owners saw their valuations increase in excess of 10%. At the other end of this scale, more than 70% of homes greater than 4,400 square feet have been assessed lower.

When you see where 0% falls on the above chart you observe that there is a 50% difference in the proportion of increases versus decreases when comparing the smallest and largest quintiles of Scarsdale homes. This profound separation of winners and losers purportedly reflects market changes in just the last two years. However, such a stark redistribution was not even true with Tyler’s revaluation based on 40 years of change. To prove this, I went back to earlier data for the same population of homes and examined the actual effects of Tyler. 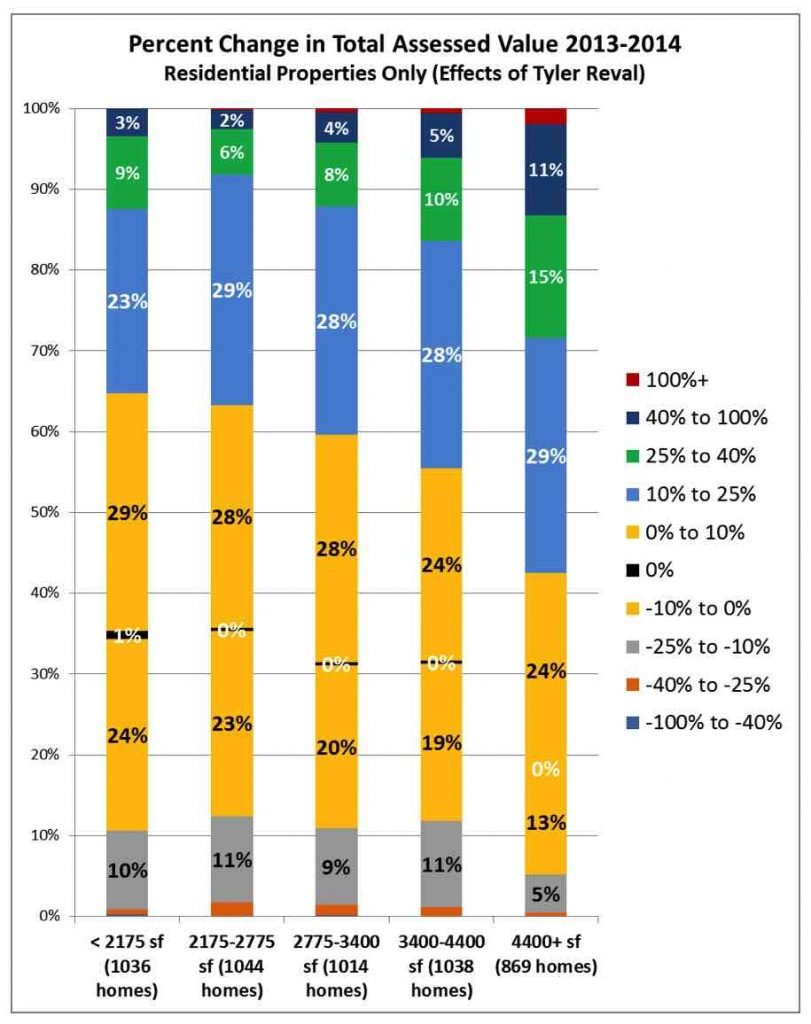 The above chart does show greater valuation changes in the larger end of the Scarsdale home market. However, the position of the 0% change line is remarkably consistent for all but the largest quintile. Overall, 15% separates the balance of winners and losers between the quintiles with the greatest separation. This is a far cry from the 50% separation now present with Ryan. With Tyler, the majority of the community saw increases in assessed value regardless of home size. This is not surprising considering that the stratification of home value differences even among similar properties would be significant after not having conducted a mass appraisal in 40 years.

The greatest weakness of the Tyler model is the apparent overemphasis on increases on the largest homes. Some of this may have been warranted and some may have been overly exuberant as has been discussed at length two years ago following Tyler. However, nothing in the Tyler chart presented here suggests a giant giveaway to smaller homes that must now be corrected by Ryan.

When you study the combined effects of Tyler and Ryan, you find that the influence of Ryan’s square root model overwhelms everything else. 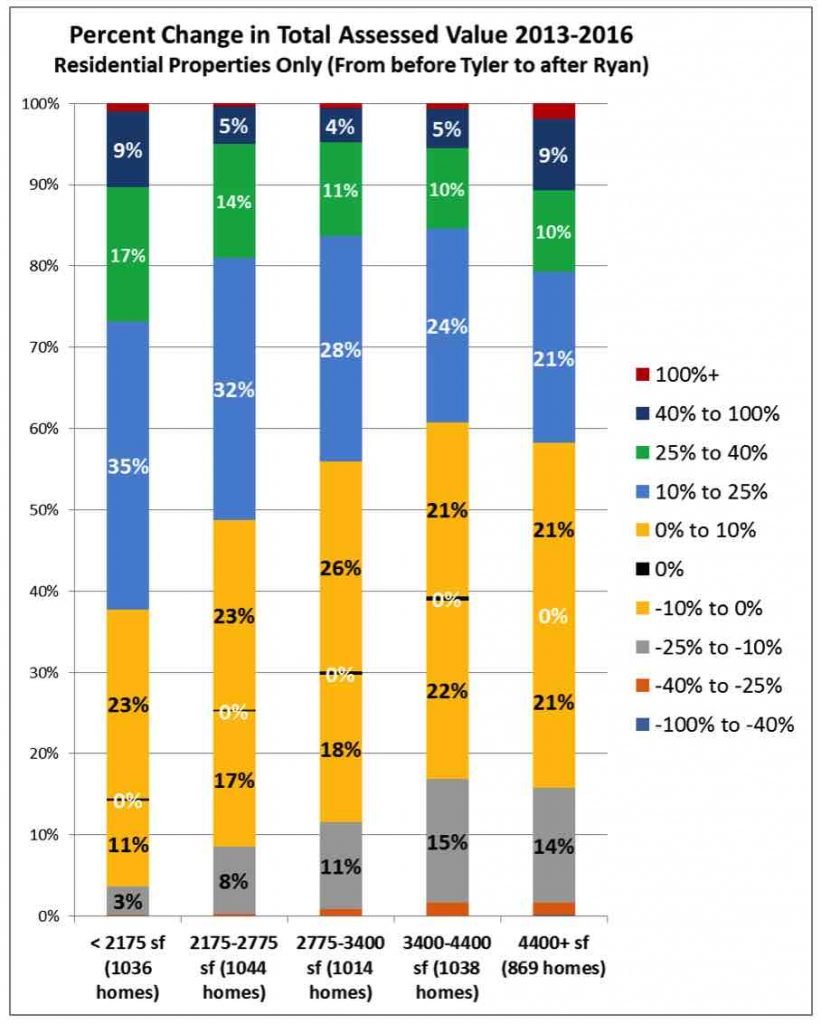 The net combined effect of Tyler and Ryan is a total assessed value that disproportionately shifts the burden to smaller homes. This is the same effect achieved with Ryan alone which suggests that Ryan represents more than just a return to pre-Tyler valuations. Ryan leaves us in a position more extreme than before or after Tyler.

While I think it is poor public policy to rely on the cost and emotional distress of a formal grievance process to fix errors and omissions in a mass appraisal, at least Tyler’s over-statement of values for some high-end and other homes could be and probably were corrected with grievances. Ryan has extracted so much value from the Assessment Roll (I estimate as much as a half billion dollars) that a correction for overvalued homes through grieving the Ryan reval will leave Scarsdale with a significantly lower total assessment than we had a year ago. This will mean that homeowners largely unaffected by the Ryan reval will nonetheless be obliged to pay an increase in taxes that exceeds the percentages approved by the Board of Education or the Board of Trustees.

Where do we go from here? It is unlikely that homeowners already burdened with the costs of a grievance process will spend even more money on a legal challenge even if it would be justified under the equal protection clauses of the U.S. and New York State Constitutions. We could wait for another revaluation, but what Board of Trustees will be brave enough to propose it? Will Scarsdale fester with the disaffection of large swaths of its electorate that will defend themselves against even more tax burden by voting against upcoming bond initiatives and annual budget increases? While Scarsdale has historically been very supportive of the resources needed to fund our excellent schools, municipal services and public employees, there is precedent for a no vote campaign and a patently unfair distribution of tax burden makes the community ripe for this kind of response. I urge the Board of Trustees to reconsider their position against independent analysis of the Ryan revaluation. Given that J.F. Ryan received no oversight and submitted his results too late to allow for an informal period of public review, an independent review seems the least the Board could do to reassert itself into oversight of this process.