“WE ARE FACEBOOK FRIENDS, AND NOW WE ARE REAL FRIENDS, TOO!” the man said, grinning and shaking my hand. It was December of 2015, and I was hosting a launch party for my poetry book, Gentle Scarsdale Satire. Even before he said his name, I recognized my affable guest from his online photos: Carlos Ramírez.

Carlos was one of the few Scarsdale men who attended my admittedly estrogen-heavy party that snowy evening. His reason, he said, was simple: He thought that encouraging my artistic efforts was the right thing to do.

That’s the kind of person Carlos is: He shows up and strives to do the right thing.
And so I’m delighted that he’s now showing up somewhere else: on the election slate for Village Trustee, as part of the Scarsdale Voters’ Choice Party. I can think of no one better equipped to steer and safeguard our town.

As I’ve gotten to know Carlos, I’ve found myself ever more impressed by his devotion to to public service. A 12-year resident of Scarsdale, he tirelessly serves on our village’s Advisory Council for Technology. This elite group helps Scarsdale’s existing trustees, showing them how tech tools can boost their efficiency. Is it hard to imagine Carlos, already a trusted advisor, stepping into the Trustee role himself?

Yet that’s only a small part of Carlos’s civic engagement. He is also a Director in the Scarsdale Forum and a member of the board of directors of the Greenacres Neighborhood Association. Carlos truly cares about our town on every level.

Even Carlos’s career experience—he’s an Account Manager and Manager of Smart Schools Bond Implementation at the Lower Hudson Regional Information Center—brings valuable experience to the table. He is forever attending school policy meetings throughout the region and understands the value of Scarsdale’s exceptional educational system. In fact his son, Ryan, is a product of our schools.

What drives Carlos to do so much for our town—and wish to do still more? The answer is in his history: He emigrated here after growing up in Peru during a time of violence and economic insecurity. “I never take democracy for granted,” he explains.

Nor should we. Please show up to the polls on March 21st and vote for Carlos. You can bet he will be showing up for us. 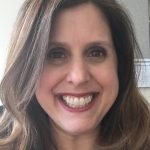 Deborah Skolnik is a long-time Scarsdale resident. She is a writer who has been published in Redbook, Glamour, Closer, The New York Times, Reader’s Digest, and Westchester magazine. She is the author of ‘100 Days of Gentle Scarsdale Satire’
and regularly writes for The Scarsdale Inquirer.